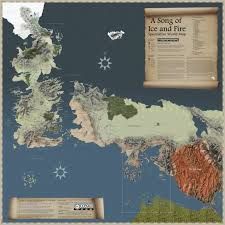 Misel Saban — May 4, 2014 — Tech
References: quartermaester.info & au.ibtimes
Share on Facebook Share on Twitter Share on LinkedIn Share on Pinterest
Fans of the hit HBO series Game of Thrones will have a lot of fun playing around with this interactive Game of Thrones map. The virtual map, created by Quarter Maester and Google Maps, converts the literary fantasy world from the Game of Thrones books into a believable and interactive map.

This Game of Thrones map, fittingly titled known as 'A Song of Ice and Fire Speculative World Map,' typographically documents every town, city, castle and ruin mentioned in the fantasy show and books. Fans of both can explore this interactive Game of Thrones map by dragging their computer cursor over the different regions. Similar to a real map in Google Maps, users can zoom in and zoom out on the page to learn more about their favorite places such as, Westeros or the Black Wall.
4.7
Score
Popularity
Activity
Freshness
View Innovation Webinars