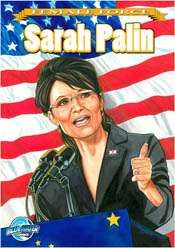 Lead cover artist Vinnie Tartamella said he wanted the women to look patriotic in the comics, and not have the “very cartoony style like most comics are.”

In the first issue, which will be released in March 2009, Sarah Palin and Hillary Clinton will be featured. Michelle Obama’s issue will release in April, and Caroline Kennedy’s in June.
3.1
Score
Popularity
Activity
Freshness
Get Trend Hunter Dashboard