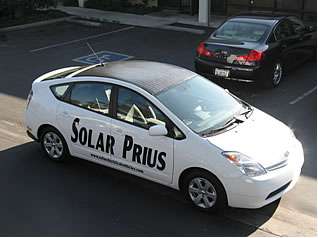 macoROCKS — December 27, 2008 — Autos
References: solarelectricalvehicles & blog.wired
Share on Facebook Share on Twitter Share on LinkedIn Share on Pinterest
Greg Johanson has been building solar powered cars since 1986. He and his pals at Solar Electrical Vehicles and Kyocera have developed a solar kit that will boost fuel economy as much as 29 percent for the Toyota Prius, or Highlander. The thing about the kit is that it requires installation by the buyer. This means that the buyer needs to watch the included instructional DVD to learn how to properly install the kit on their Prius. The DIY nature of this product may appeal to some, while turning others off.

The technology is still a bit expensive for mass production, but the developers are definitely improving the design to make it more affordable, without compromising on the functionality. Some may still want to pay the $3,500 price tag for this first of its kind product that will eventually pay for itself and save the kit-owner in energy costs. And for those that may want to wait it out, let's hope that this initial high price will come down in the near future, as happens often with new technologies.

By the way, SEV is already working with Ford, and hoping to strike a deal with General Motors. Additionally, SEV is working to get the government to offer tax breaks so buyers can recuperate the cost within two to three years.
2.1
Score
Popularity
Activity
Freshness
Attend Future Festival