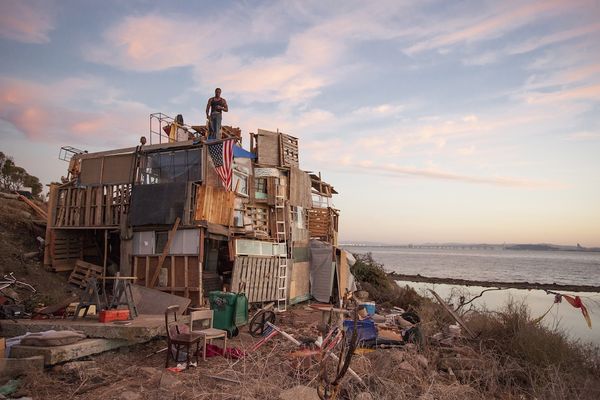 Rahul Kalvapalle — April 13, 2014 — Tech
References: markandrewboyer & slate
Share on Facebook Share on Twitter Share on LinkedIn Share on Pinterest
This photography series by University of California-Berkley journalism student Mark Andrew Boyer captures a homeless boxer building a shack in which he could live and train. The boxer, Bob Anderson, was active in the Las Vegas professional boxing circuit, but became homeless after his mother -- who he used to live with -- died in 2011.

The photos show Anderson putting together a massive shack fashioned out of large scrap wood. The shack is situated in the Albany Bulb, a former landfill in the city of Albany in California. The Albany Bulb is 'home' to several homeless people like Anderson.

What's stunning about this photo series is that its main protagonist does not look like a typical homeless person, in that he is incredibly fit and strong. This has to do with the fact that Anderson, despite being a homeless boxer and no longer a professional, trains every day to remain physically fit and mentally active. The photo series includes photos of Anderson training with a large punching bag outside his shack.
4.7
Score
Popularity
Activity
Freshness
Get Trend Hunter Dashboard