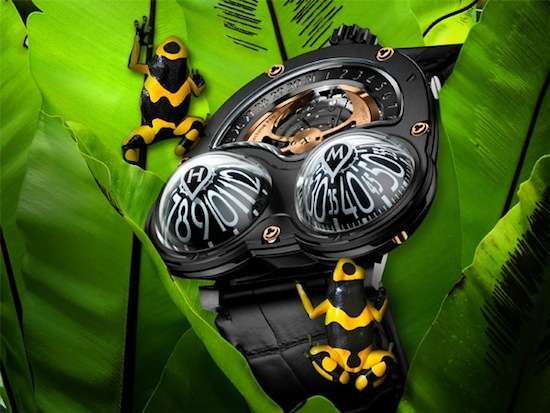 The HM3 Frog Watch Tells Time from All Angles

MB&F are ahead of the game when it comes to luxury time pieces, and this HM3 Frog watch is redefining how people tell time. Designer Maximilian Busser has turned to rainforest creatures as inspiration to his latest watch, more specifically, the yellow-branded poison dart frog: Dendrobates Leucomelas. The watch is largely based off of the frog’s protruding eyes that allow the frog to see in many directions without having to move its head. The HM3 watch is capable of telling time from all angles with its two large, rotating spherical hour and minute domes.

The watch is made from a grade five titanium, a blue 22-karat gold battle axe-winding rotor and 18-karat yellow gold screws. Unfortunately, the HM3 Frog watch is limited edition -- only 10 watches will be released, so buy quickly!

Reflecting Faceted Timepieces
The Lake of Shimmer-Avant Time No. 3 is Simply Luxurious