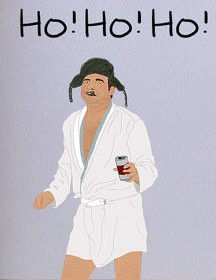 Everybody has that embarrassing relative. You know, the one who gets obnoxiously drunk, cracks inappropriate sex jokes and somehow mysteriously loses their pants at every family function. They're the one person that you dread introducing your significant other to at Christmas dinner because it might genuinely, truly scare them off. Still, the sleazy uncle is a comedy staple. I mean, what kind of holiday would it be without Uncle Lloyd asking you to pull his finger?

This card features the drunk uncle archetype in his element: wearing a robe and trapper hat, a cigarette dangling from his mustached lip and a beer clutched in his perpetually sweaty hand. The text above his head reads "Ho! Ho! Ho!", which is most likely in reference to strippers -- not holiday cheer.
6.1
Score
Popularity
Activity
Freshness
Get the 2021 Trend Report FREE