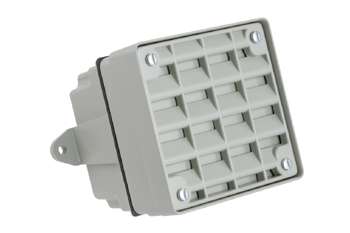 IdeaMan — February 17, 2008 — Life-Stages
References: kidsbegone & timesonline
Share on Facebook Share on Twitter Share on LinkedIn Share on Pinterest
A controversial device that uses high frequency sound to disperse groups of teenagers has been installed in more than 3,500 locations across the UK. The frequencies used by the device, known as the Mosquito, can only be heard by young people and children. Most people have lost the ability to hear those frequencies, 17 - 18 kHz, by the time they reach 25 years of age. The sound is emitted at a level of 5 dB above surrounding noise levels, up to a maximum of 85 dB, about as loud as busy city street. The sound does not cause pain or other physical discomfort, but instead eventually becomes annoying to those that can hear it, just like a pesky mosquito, causing them to move on.

People and businesses who have installed the device, as well as the police, seem to be satisfied that it works as advertised, and see it as a tool to protect people and personal property from large groups of youth, such as gangs. However, not everyone approves of the device. Some see a problem in its lack of selectivity, as reported by Timesonline.co.uk: â€œThese devices are indiscriminate and target all children and young people, including babies, regardless of whether they are behaving or misbehaving,â€ Sir [Albert Aynsley-Green, the Children's Commissioner for England] told the BBC. â€œThe use of measures such as these are simply demonising children and young people, creating a dangerous and widening divide between the young and the old.â€
6
Score
Popularity
Activity
Freshness
Jeremy Gutsche Keynote Speaker