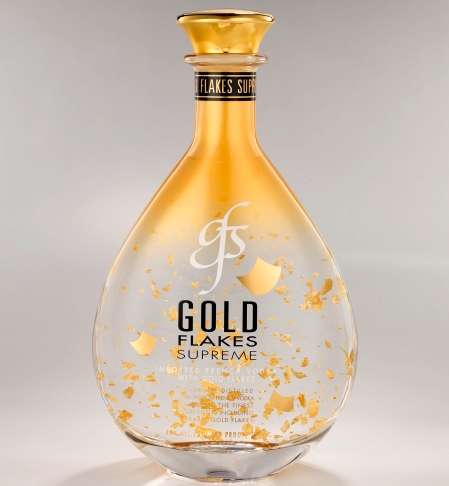 Juan Rodriguez Villa — August 27, 2007 — Unique
References: gold.org
Share on Facebook Share on Twitter Share on LinkedIn Share on Pinterest
French Vodka company, Shaw-Ross Importers, is ready to take the Russian staple to a whole new level of luxury -- by infusing it with real gold! The liquor is a fusion of purified underground spring water, 24K gold flakes, and some secret ingredients which the company has yet to reveal.

Luxury AND mystery? Sounds like a recipe for success! The gold-infused Vodka will be retailing for about $60 per 750 ml bottle, and will no doubt fly off shelves of exclusive stores.

"The shimmering flakes of edible gold that glitter magically in Gold Flakes Supreme's crafted quality bottle bring to life all of gold's most desirable associations and expectations," Shaw Ross reported. "Such associations include the alchemical symbol of perfection, gold as a symbol of wealth, and gold as an ancient emplem of respect," the World Gold Council elaborates.
6.1
Score
Popularity
Activity
Freshness
Get the 2021 Trend Report FREE