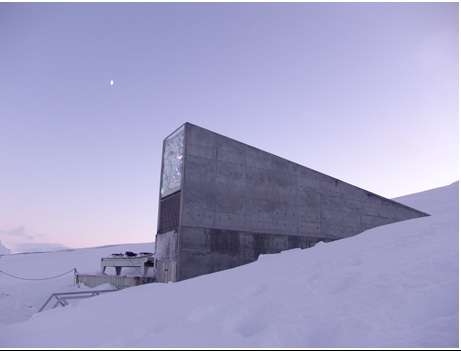 Sandra Winn — December 3, 2008 — Eco
References: news.nationalgeographic & freshcreation
Share on Facebook Share on Twitter Share on LinkedIn Share on Pinterest
In February of 2008, news sources such as NBC Nightly News and National Geographic announced the opening of ‘The Doomsday Vault’, a massive structure designed by scientists used to store and preserve the world’s seeds in case of a global catastrophe, like a global thermonuclear war or a meteor hitting the earth.

Although news of the Doomsday Vault is months old, it caused me to ponder whether we would see similar structures being built as a preemptive measure to preserve other forms of life should a global catastrophic event occur, be it natural or man-made.

Considering the advancements in technology such as freezing sperm and embryos, I think it’s highly plausible that we may one day see a global measure for cryopreservation facility built in a remote location, like the Doomsday Vault. It would be complete with tons of security and nuclear-proof, to ensure that one day birds, reptiles, and mammals will one day thrive should the worst happen.
1.1
Score
Popularity
Activity
Freshness
Access Advisory Services