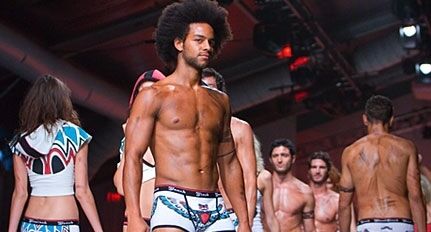 Bianca — December 14, 2007 — Fashion
References: ginchgonch & slice
Share on Facebook Share on Twitter Share on LinkedIn Share on Pinterest
Lingerie is no longer just for the ladies, an increasing number of men are squeezing their buns into teenie tiny sexy undies too, and loving every minute. Ginch Gonch puts on an annual fashion show that could be likened to the Victoria's Secret fashion how for men's wear.

Ginch Gonch is all about fancy prints, patterns and fun designs.

"How do I love Ginch Gonch? Let me count the ways," Slice said. "One - they have fashion shows in which extremely hot and greased up male models dance about in underwear. Remember when you had a crush on a boy in your class but you couldn't openly stare at him because it would be weird? But then it was speech day and he was giving a speech, so you were allowed to stare at him? The Ginch Gonch show was that times a million."

Men are no longer satisfied with ordinary boxers or briefs.

"Times are changing and guys are becoming more comfortable and excited to go out and why not, when they put on their underwear, put on something that makes them feel good?" asked GQ fashion editor, Damien Nunes.

In 2006, less than 50% of men's underwear sold was white. As the trend picks up, the likelihood of an encounter with a tightie-whitie-clad man in 2008 is increasingly slim.
6.8
Score
Popularity
Activity
Freshness
Jeremy Gutsche Keynote Speaker