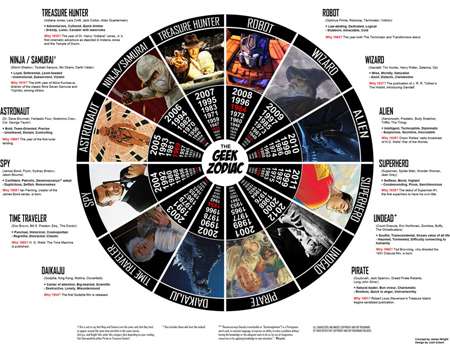 The Geek Zodiac Wheel Spins a New Light on the Stars

The Geek Zodiac has put a spin on the Chinese Zodiac Wheel with a set of new signs. The traditional is gone and new signs such as 'Treasure Hunter,' 'Spy,' 'Alien' and 'Undead' have replaced them. But like the traditional wheel, the Geek Zodiac signs correspond to birth years.

Additionally, this Geek Zodiac wheel informs the user of his/her personality traits. For myself, being a "time traveler," I am punctual, a historicist and a cosmopolitan. Personally though, I don't see myself as a time traveler and would much rather be a spy or ninja, the Geek Zodiac wheel is a cool way to have a few chuckles with your friends and poke fun at the universe.
6.2
Score
Popularity
Activity
Freshness
Jeremy Gutsche Keynote Speaker