Fuel That Grows on Trees

Green Algae As Biofuel
Next
Set of
Related
Ideas 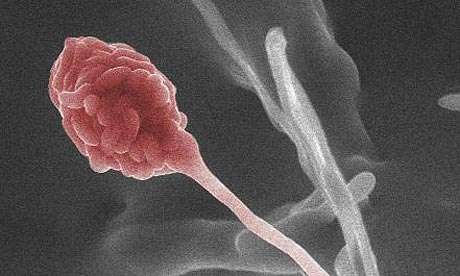 Myco Diesel Made of Fungus

IdeaMan — November 11, 2008 — Autos
References: guardian
Share on Facebook Share on Twitter Share on LinkedIn Share on Pinterest
We all know that money doesn’t grow on trees, but now it seems that diesel fuel just might! According to Guardian.co.uk, scientists have discovered a fungus in the Patagonian rain forest that “naturally produces a mixture of chemicals that is remarkably similar to diesel." These chemicals are reportedly “virtually identical” to fuel grade compounds currently found in fossil fuels.

Although other organisms, such as algae, are already known to have the capability to produce fuel-like chemicals, this fungus is the only one known to produce hydrocarbons of this nature.

"This is the only organism that has ever been shown to produce such an important combination of fuel substances," said Gary Strobel, a plant scientist from Montana State University who led the work. "We were totally surprised to learn that it was making a plethora of hydrocarbons."

Yes! A plethora, no less! In fact, the chemical mix is so similar to conventional fossil fuel that Mr. Strobel dubbed the mixture “Myco-diesel”.

If a process can be developed to grow the fungus and extract the “myco-diesel” on a commercial scale, this discovery could lead to another piece of the alternative fuel technology puzzle.
3.9
Score
Popularity
Activity
Freshness
Get Trend Hunter Dashboard