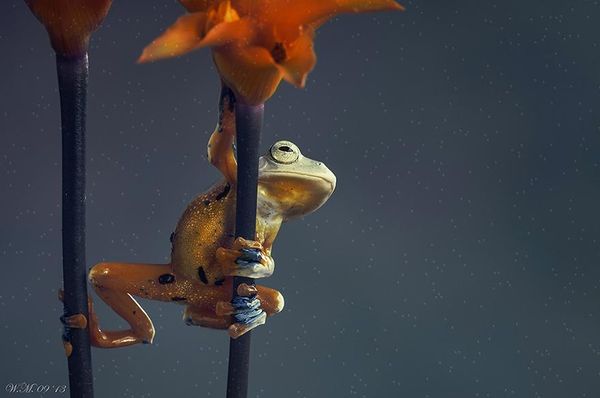 Michael Baxter — May 25, 2014 — Art & Design
References: 500px & boredpanda
Share on Facebook Share on Twitter Share on LinkedIn Share on Pinterest
Unless you're a serious fan of amphibians, frog photos may not be the number one kind of photography you actively seek out, but the way Wil Mijer portrays these playful creatures may change your mind. These photos take frogs out of their typical mossy homes in the swamp and puts them out in a new, mystical world.

While frogs aren't scorned nearly as much as snakes and spiders, they still aren't everybody's favorite animal. While they can be considered pests, they do have their redeeming qualities, all of which are brought out in this photo series.

The frogs photographed aren't the typical garden variety though, as all of them are colorful, tropical frogs. Laying their colorful skin against an equally magnificent background makes for some beautiful macro photography.
4.4
Score
Popularity
Activity
Freshness
Get the 2021 Trend Report FREE

Cute Computer-Animated Eyeballs
These Interactive Toys Could Change the Future