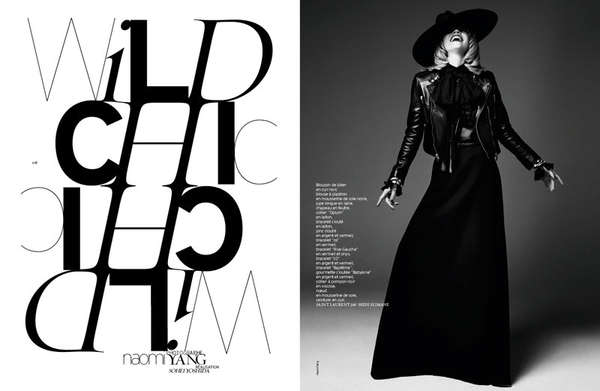 Meghan Young — March 6, 2013 — Fashion
References: frenchrevue & fashiongonerogue
Share on Facebook Share on Twitter Share on LinkedIn Share on Pinterest
The French Revue de Modes 'Wild Chic' editorial could easily have been titled 'Tough Chic.' Model Masha Novoselova is not only clad in dark leather ensembles befitting of such a persona, she also exudes a tenacious attitude that no one would want to mess with. Nevertheless, this strength and independence simply fuels her sexiness, which some of the lingerie-inspired outfits help with as well.

Lensed by photographer Naomi Yang, the French Revue de Modes 'Wild Chic' editorial was shot completely in black and white. Styled by Sohei Yoshida, the Russian beauty is clad in seductive outfits from the likes of Gucci, Celine, Givenchy and Balmain. The looks showcased in the studio photoshoot were perfected with various hairstyles from bouncy to damp as well as full makeup that incorporated dark eyes and chiseled cheeks.
5.7
Score
Popularity
Activity
Freshness
Get the 2021 Trend Report FREE