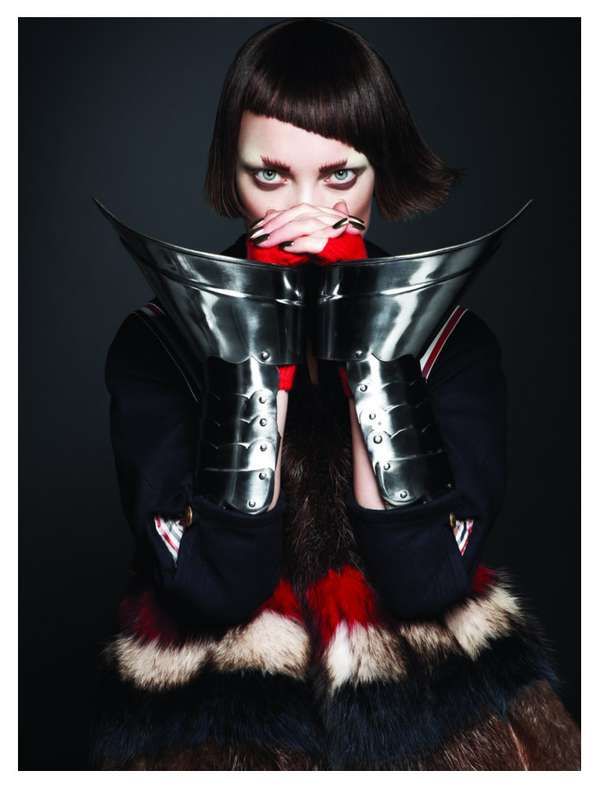 Marriska Fernandes — October 7, 2011 — Fashion
References: frenchrevue & fashiongonerogue
Share on Facebook Share on Twitter Share on LinkedIn Share on Pinterest
Dark and gritty captures are on the incline as every editorial uses this technique to grasp the audience's attention, as does the 'French Revue de Modes' Naty Chabanenko spread. It has all of the right ingredients: a bit of nudity, hot clothing, as well as the cat-woman qualities that create a fiery shoot.

The spread looks as if it were pulled from posters for a die-hard action film where Naty plays the lead role. The highlights of this shoot include the asymmetric lopsided bangs that, for some odd reason, are eerie and eye-catching. The entire spread has the Ukrainian model sporting ice-black jackets and blazers that add a mysterious spin to the shoot.

Captured by Paris-based photographer Ishi and styled by Zeina Esmail, the shoot simply captivates the viewers' attention with the gritty, architectural designer wear from the likes of Louis Vuitton, Chanel, Gucci and many more.
3.8
Score
Popularity
Activity
Freshness
Get Trend Hunter Dashboard