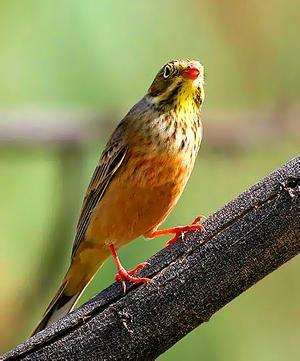 Lauren G — September 25, 2007 — Lifestyle
References:
Notice: Undefined index: host in /home/jeremy/public_html/thcp/core/core.functions.php(637) : eval()'d code on line 3
Share on Facebook Share on Twitter Share on LinkedIn Share on Pinterest
The ortolan is a copper-breasted bird that migrates from Africa to Europe. Thought to represent the soul of France, it is also a bite-size delicacy: a songbird roasted and gulped down whole. According to tradition, the French shroud their head in a napkin to eat ortolan, which is killed by being drowned in armagnac, plucked and roasted with its yellow skin and skeleton intact. Aficionados say it is satisfyingly crunchy, with a subtle hazelnutty taste.

Ortolan was on the menu at late French President Francois Mitterrand's legendary "last supper" on New Year's Eve, 1995. Though cancer had diminished his appetite, Mitterrand saved room for the piece de resistance, the roasted ortolan, downing the 55 gram bird, bones and all. He died eight days later.

However, this gourmand's delight is now an endangered and illicit species. A 1998 law banned hunting the ortolan in France because of its endangered status. Ortolan hunters - who trap the birds alive and keep them in cages for several weeks to fatten them up - face fines of up to 9,000 euros and six months in prison, if caught and convicted.

However, hunters still kill as many as 30,000 ortolans each year in France alone, contributing to an estimated 30 per cent decline in their numbers over the past decade. Environmentalists complain the law is rarely enforced and blame the poaching on continued demand for roasted ortolan. No longer on restaurant menus in France because of the ban, ortolan is eaten at home or served secretly to special restaurant clients. A single bird can fetch up to $US150 on the black market.

Fans of the dish have decried the increased inspections, saying they threaten a uniquely French culinary tradition. And you thought frogs legs and snails were odd.
2.9
Score
Popularity
Activity
Freshness
Access Advisory Services