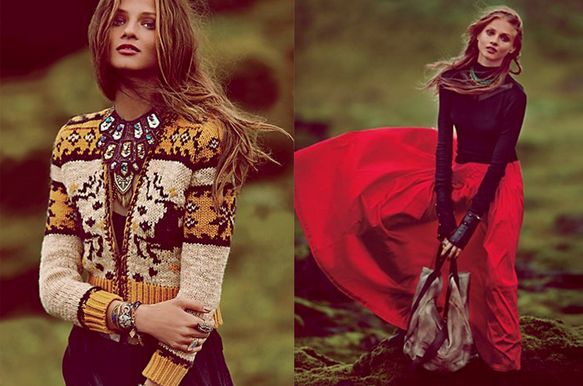 Meghan Young — November 8, 2013 — Fashion
References: freepeople & magdalenawojcik
Share on Facebook Share on Twitter Share on LinkedIn Share on Pinterest
The looks featured throughout the Free People November 2013 lookbook may have a decidedly fall appeal to them since there is still a warmth in the air that is not often associated with winter, yet the pieces are borderline festive as well. This is appropriate considering that it is the label's holiday catalog.

From printed pants to knitted reindeer sweaters and tons of red accents, the Free People November 2013 lookbook could have easily been set at a ski resort rather than in the countryside of New York City. It follows models Anna Selezneva, Karlie Kloss and Martha Hunt as they frolic in the darkly green pastures in the line's most covetable designs.

Since the Free People November 2013 collection is divided into the five elements (earth, air, water, spirit and fire), this must be the latter.
5.2
Score
Popularity
Activity
Freshness
Jeremy Gutsche Keynote Speaker