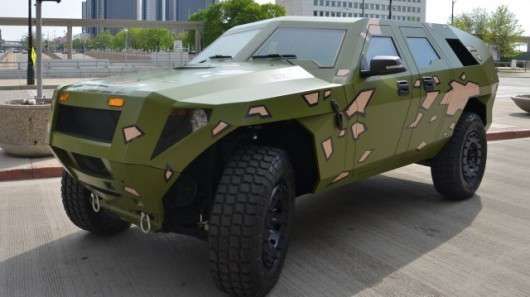 While average consumers are complaining about rising gas prices and have been making the move to more efficient and eco-friendly vehicles, the army has yet to extensively incorporate electric powered technology into their combat cruisers -- until now.

The 20,000 pound, fully armed and bullet-proof assault automobile was created thanks to funds from the Department of Defence and design ideas from students at Detroit's College for Creative Studies. While these usually gas-guzzling monster cars are somewhat out of place in regular suburban society, they are an essential mode of transport for personnel in the armed forces.

Advances leading toward more cost-effective and sustainable fuel sources for these massive off-roaders is an important step toward keeping the nation safe without leaving a huge dent on the planet.
2.2
Score
Popularity
Activity
Freshness
Get Trend Hunter Dashboard

Hummer-Tank Hybrids
Is the Mahindra Marksman a Tank or a Hummer?