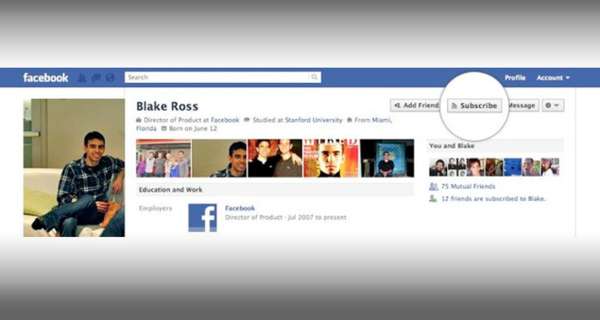 Facebook Subscriptions Let You Build a Cult of Personality

The problem was simple: You admire a celebrity or someone famous, but they either don't appear on Facebook (under their real name, anyway) or simply won't accept your friend request. The solution is even simpler -- taking a barely legal stab at Twitter, users need only click the "subscribe" button on the profiles of their favorite writers, actors and thinkers. Instead of adding someone like Richard Branson as a friend with whom you can interact, Facebook Subscriptions lets you follow the celebrity in question, seeing his updates without the ability to pester him with creepy messages.

In the end, everyone wins (sort of)! The celebrity garners a following while maintaining his or her privacy to a degree, while eager fans are supplied with all the morsels of info they could ask for.
4.7
Score
Popularity
Activity
Freshness
View Innovation Webinars