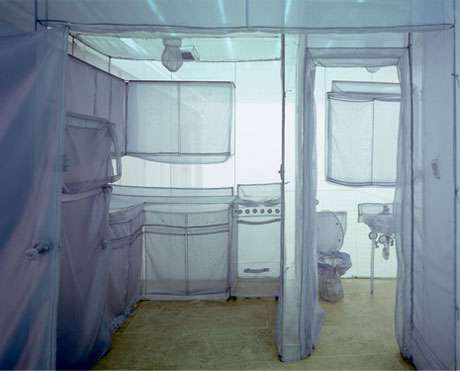 Hayley Grieve — November 26, 2008 — Art & Design
References: brown.edu
Share on Facebook Share on Twitter Share on LinkedIn Share on Pinterest
Korean-born artist Do-Ho Suh was inspired by the difficulties and emotions that accompany immigrating to a new country, thousands of miles away. Suh moved to the United States as a child, and lying awake one night many years later, he got the idea for his first project entitled “Seoul Home/L.A. Home.” What emerged was an incredibly detailed, sewn-nylon replica of his childhood home. The beautiful translucent fabric manipulated into structured corners and door knobs is striking.

Later on, Suh created another airy design of his NYC apartment entitled “348 West 22nd St., Apt A, New York, NY 10011.” Again, no details were overlooked, from the light switches to the refrigerator. Perhaps most exciting of all is that Suh can literally pack his “home” into a suitcase and travel with it from exhibit to exhibit. It’s this concept of moving and belonging somewhere that got him motivated in the first place.

"I don’t really get homesick, but I’ve noticed that I have a longing for this particular space and I want to recreate that space or bring that space wherever I go," he said.