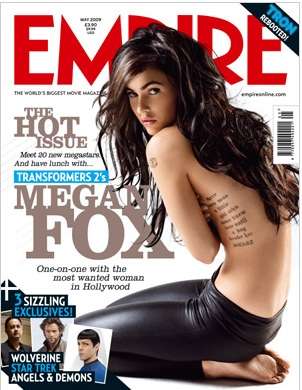 Sandra Winn — April 2, 2009 — Pop Culture
References: empireonline
Share on Facebook Share on Twitter Share on LinkedIn Share on Pinterest
Empire Magazine’s May 2009 cover features sexy Megan Fox with an Autobot tattoo. Hold the phone; we’re used to magazines photoshopping bodies to perfection, but upon closer examination, it appears that ‘Empire’ used a recycled photo of Fox and the tat was photoshopped.

The cover photo of the ‘Transformers 2’ star, Megan Fox, nude from the waist up and covering her breasts with her arms, was taken from T List Magazine. Maybe Empire Magazine, feeling the credit crunch, decided using an older picture of Megan Fox was cheaper than paying for a new one? Who knows.

Regardless of Empire Magazine's reason for using a duplicate photo of Megan Fox on their May 2009 cover, they aren’t the first magazine to reuse photos, as you’ll note from the gallery below.