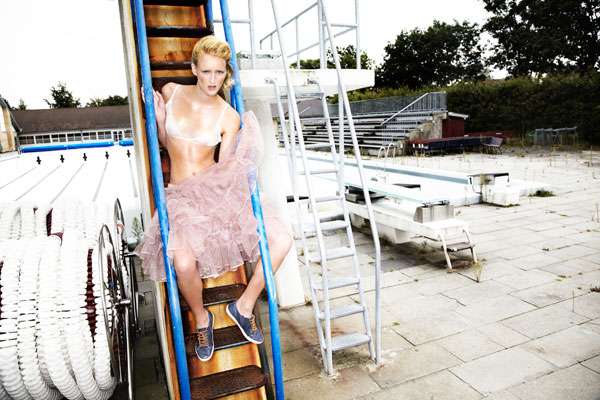 Marie C. Hudson — September 13, 2011 — Pop Culture
References: touchpuppet & touchpuppet
Share on Facebook Share on Twitter Share on LinkedIn Share on Pinterest
An abandoned pool and a pink tutu might not sound like the makings of a hot fashionista shoot, but that's exactly what you'll find in the steamy Emil Monty Freddie Touchpuppet photos. Model Emma of Le Management gets in front of the camera for the Denmark-based photographer, who shot this appropriately titled 'Swim! Swim! Swim!' set exclusively for Touchpuppet.

As a newcomer to Emil Monty Freddie's work, I'm completely blown away by his ability to capture Emma in a wide spectrum of contrasting lights -- from a playful poolside babe to a statuesque sophisticated lingerie model. Emma also deserves major props for this stunning shoot, pulling off a variety of looks in such an elegant manner. In some of the shots, her incredible poise and stoicism allows her to almost resemble a store mannequin.

Though summer may be over for many (myself included), this Emil Monty Freddie Touchpuppet shoot is the perfect way to reminisce about poolside fun and to gather some inspiration for next season's swimmer styles.
3.1
Score
Popularity
Activity
Freshness
Jeremy Gutsche Keynote Speaker