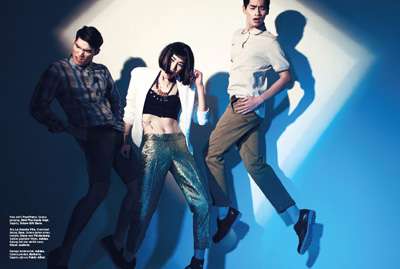 Models Have Fun in 'Flashy Moves' for Elle Indonesia February 2012

Katherinev123 — February 1, 2012 — Fashion
References: rajasiregar.blogspot & designscene.net
Share on Facebook Share on Twitter Share on LinkedIn Share on Pinterest
Prepare to have a whole lot of fun as you click through these images from the 'Flashy Moves' shoot for the Elle Indonesia February 2012 issue. While the backdrop is super simple (just basic colored backgrounds), there's no denying that the models in this shoot are having the time of their lives as they dance, laugh and jump around.