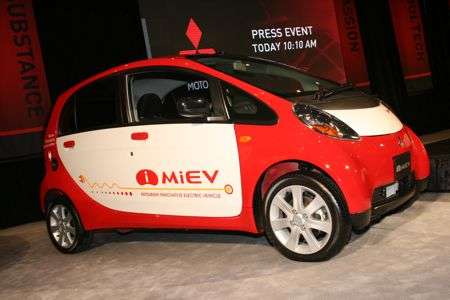 Andres Colmenares — October 1, 2008 — Autos
References: mitsubishi-motors & autobloggreen
Iceland has a brave challenge. In 1998 they made a promise to be totally fossil fuel free by 2050. With only 40 years left to achieve the goal, they are making significant steps to actualize it.

They are joining the Mitsubishi electric car program, allowing the Japanese company to test their electric car, the iMiEV on the island in 2009. Iceland’s president, Olafur Ragnar Grimsson, is signing the papers to empower this project.

The Mitsubishi iMiEV is 100% electric and will be ready for production by 2010, the same time the Chevy Volt and the new Toyota Prius are set to release.

“Its only limitation is range since even the most advance lithium ion batteries only provide enough power for 100 miles,” Autoblog Green says. “But that’s more than enough for Iceland since 75% of the population lives within 37 miles of the capital, Reykjavik.”
4
Score
Popularity
Activity
Freshness

69 Electrified Rides
From Tesla Motors Creations to the Nissan Leaf