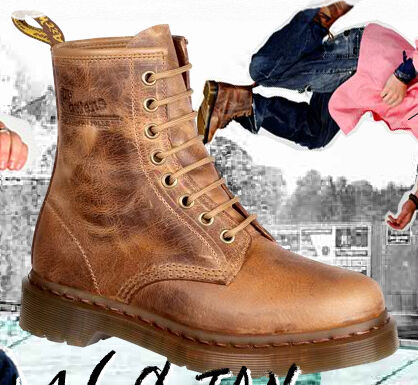 Bianca — December 3, 2007 — Fashion
References: drmartens & nytimes
Share on Facebook Share on Twitter Share on LinkedIn Share on Pinterest
Eww. Just eww. I try to stay impartial to trends, but I pray no one actually dons these in an attempt to be cool. Even the New York Times recognizing the Dr. Martens as an "Antifashion." The footwear company has launched a new campaign in an effort to re-boost the appeal of the clunky, rubber-soled atrocities. The ads include both print and fashion show appearances.

They are no longer represented by London-based Saatchi & Saatchi after the spring's dead rock star advertising disaster. Their new agency is Exposure Communications of London, and as ugly as Docs are, I have to admit, they did an awesome job!

The ads feature gorgeous models in little more than the Docs, showing lots of skin in their "grunge- and punk-inflected outfits and expressions of bored disaffection," the NY Times explained.

The ads are appearing in fashion magazines in North America and Europe including Teen Vogue and British GQ.

To further boost appeal, the company is giving free pairs to stars for the celeb endorsement useful in kick starting any fad. They've given pairs away to Avril Lavign, Gallows and the Misshapes in an attempt to repeat past success; after all, it was from being seen on the soles of rock bands that the brand gained popularity in the first place.

There are about 450 styles on the market available both online and from major retailers. The Dr. Martens site also has a new section that lets users design the next boot and have others view and rate them.
5.7
Score
Popularity
Activity
Freshness
Attend Future Festival Virtual