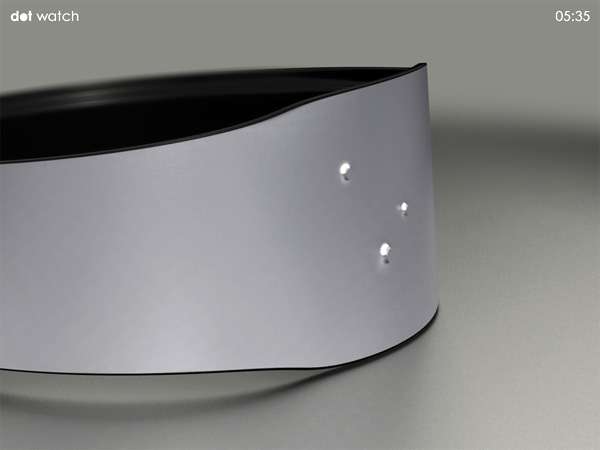 Meghan Young — July 22, 2011 — Fashion
References: yankodesign & trendsnow.net
There are minimal timepieces and then there is the Dot Watch. A sleek and simple wristband, it looks more like a futuristic cuff than an actual device that tells the time. Of course, the discreet inner workings of the Dot Watch might just save you the trouble of small chit chat whenever you are asked what time it is.

Designed by Samuel Jerichow, the Dot Watch essentially tells time using, you guessed it, dots. Although it seems pretty complicated at first, it really isn't. Basically, the Dot Watch does away with the traditional face, but not entirely with the hands. Instead of utilizing those classic hands, however, Jerichow replaces them with three dots, two of which remain hidden until the middle one is pressed. Once pressed, the minute and hour indicators pop up to tell the time.
5.9
Score
Popularity
Activity
Freshness