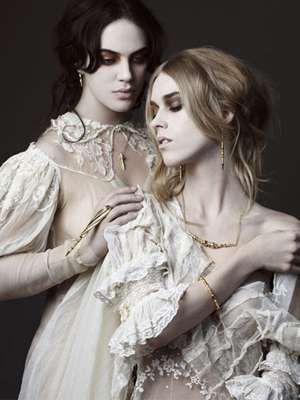 Meghan Young — February 29, 2012 — Fashion
References: dominicjonesjewellery & refinery29
Share on Facebook Share on Twitter Share on LinkedIn Share on Pinterest
Everyone is hopping on the 'Downton Abbey' train, including the designer behind the Dominic Jones AW12 collection and catalog. Inspired by the British period drama, the lookbook stars one of its main actresses, Jessica Brown Findlay, also known as Sybil Crawley.

The Dominic Jones AW12 collection is romantic, ornate and antique-like with a contemporary edge. The catalog itself is hauntingly beautiful. Findlay and British model Mary Charteris are given a ghostly makeover with pale, powered faces and dark, sunken eyes. The golden jewelry pops out boldly against the white, lacy ensembles in which they are draped. At once delicate and daring, the accessories are statement pieces that would spruce up even the most dazzling dresses.