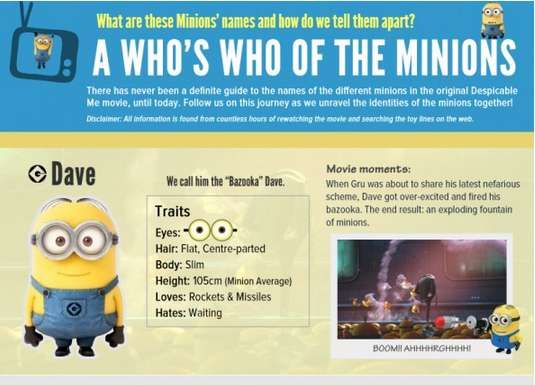 This Infographic Names All the Despicable Me Minions

Misel Saban — July 12, 2013 — Pop Culture
References: collectib.ly & visual.ly
Share on Facebook Share on Twitter Share on LinkedIn Share on Pinterest
The Despicable Me minions are some of the most lovable villainous film characters around. While as a group these cuddly yellow aliens are super adorable, many people don't actually know that they each have names, interests and individual personalities. This 'A Who's Who of the Minions' infographic explains which minion is which, how to tell them apart and what their names are.

The 'A Who's Who of the Minions' infographic is divided up by each minion, their name, famous movie moment and their traits to help viewers learn the names of the different minions. Each movie moment comes with a detailed expiation of the scene and even an image to help you remember which minion is in the scene. Then, the minion traits are divided up by their measurements, loves and hates. Did you know there was a minion named Jorge?