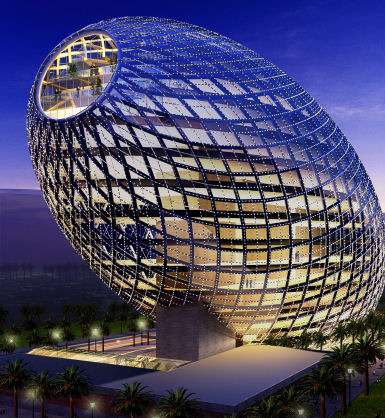 Bianca — May 29, 2008 — Eco
References: worldarchitecturenews
Cybertecture Egg is a new office design set to be built in India. The smart architectural egg is a design based on interactive building designs of the future, a term being referred to as Cybertecture, dubbed by company, Cybertecture International.

When it is complete, The Cybertecture Egg in Mumbai, India will be one of the world's most high tech office buildings. The structure, which appears to be resting on an angle, does not have a rounded tip, but instead the top of the 13th floor on the 32,000 sq m building is flat. In it rests a sky garden that will perform thermolysis.

"PV panels will be installed on top of the building and a wind turbine on the sky gardens will generate electricity," World Architecture News says. "A water filtration system will also be incorporated into the building to recycle grey water for flushing and irrigation purpose."

The building is packed with elements intended to give those working in the building the top in terms of office luxury, including health monitors in bathrooms that are capable of performing on-site testing like weigh-ins and blood pressure checks.

They've estimated the project will be complete by the end of 2010.