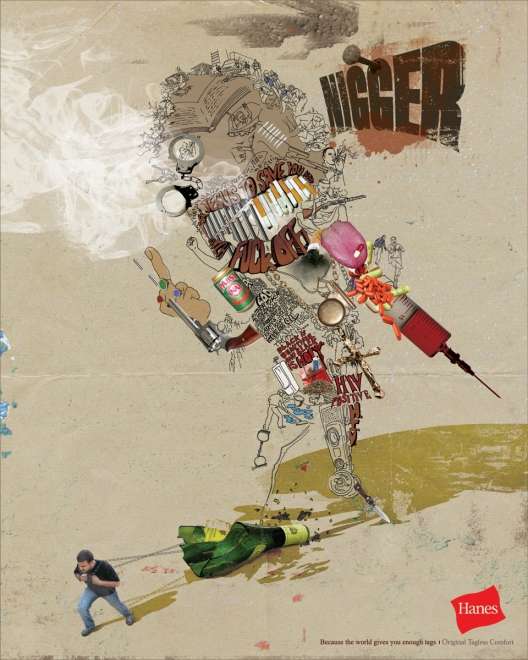 The concept of tags might be a smart idea, playing on the social tags to promote tagless undies is very creative. But, in my opinion, this is a stupid delivery! I believe the mere use of such hateful tags to promote underwear is a foolish, immature and cheap way to garner publicity for this controversial campaign, but they go even further with illustrations and slogans that make matters worse.

In Fagg*t, you see same-sex kissing, debauchery, toys, bottles of wine and references to beauty: lipstick, nail polish and makeup. In Nigg*r, you see drugs, guns, jail cells, low-life jobs like cleaning toilets, and text about being HIV positive. In Pak! (a demeaning name for people from Pakistan), you see tanks, bullets, bombs and pigs (an anti-Islamic reference).

Such a campaign would never be approved in Europe or America, where the use of such hateful references is a big 'No No', even when you are trying to use it in a positive light. The campaign was created by an Indian advertising agency (Mccann Erickson, Bombay, India).

It's a pity, because I actually like the art direction (Timsy Gupta) and illustration (Pranav & Timsy).