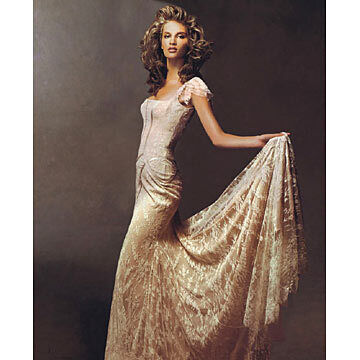 Women are wearing everything from dark neutrals like mocha to richer tones like eggplant. In Vancouver, the 'it' colour for gowns has become crimson red!

Other brides who aren't quite ready to go all the way with color are integrating accent pieces in the bodice, train, veil or accessories.

While the bride used to be the token person in white, many modern women are choosing to blend in more with their bridesmaids, selecting colors from their wedding party to integrate into their own gowns.

The traditional significance of the white dress has really gone out the window. While society has abandoned many traditions they no longer feel apply to them, the wedding has been one of the last to be modified.

It's difficult too, for many brides. Not so much because of their own opinions, but because of the pressure they get from others, mainly older relatives. Not wearing a white dress used to imply the bride wasn't pure... but remember, these are the days where premarital sex isn't just accepted, it's expected. We see it in movies, shows, books, we hear it on the radio. Times have changed, so it would almost be ignorant to continue with traditions that really no longer apply.

"During the Revolutionary War, some brides wore red to symbolize the independence the Colonists desired. Other brides wore purple which represents honor and courage during the Civil War as a tribute to the war dead," according to Journey Woman.

Increasingly, couples are choosing to stray from traditional wedding practices, which opens the door to so many more possibilities. After all, the day is intended to celebrate the relationship and should therefore be a reflection of both personalities as they come together. A white dress doesn't really leave much room for self expression.

A major reason for the shift form traditional white could be globalization and acceptance of all cultures.

In Morocco, brides favor vibrant yellow dresses, not for aesthetic reasons, rather, they believe that the color chases away the evil eye. It's not uncommon to see them wear green either as it's believed to bring good luck. In Africa, many woman select patterns that reflect their particular tribe. Japanese brides often accent their white gowns with red, again for luck. In Spain, Roman Catholic brides often wear lacy black dresses as a symbol of their devotion until death. Wedding Saris in India come in beautiful colors as well, and Korea, lime green isn't uncommon.

In China, many wear red which represents luck in their culture. Could the dense Asian population be the reason so many people in Vancouver are wearing red?

No matter the reason, it's nice to know there are selections.

Enjoy the gallery!
1. Golden mocha dress without the traditional poof
2. A stunning turquoise gown from Jana
3. This burgundy dress was seen on eBay
4. Gwen Stefani's wedding gown designed by John Galliano had a gorgeous pink infusion
5. How's this for original? This dress from TreeHugging Family is symbolic of the bride's eco-friendly beliefs.