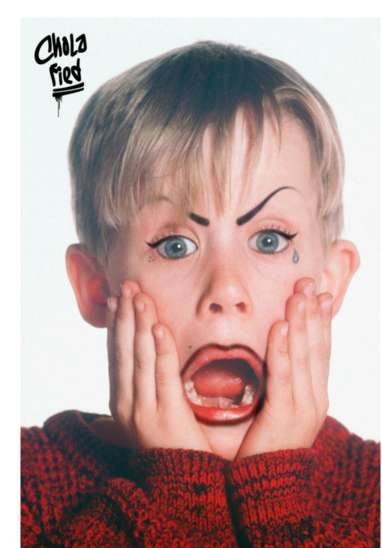 Enriquez, an advertising student from California, created this photo series to poke fun at the intense Chola makeup technique prominent in the 90s. The term Chola refers to a Latin American women or women with Indian blood, often with an overabundance of cosmetics. The stereotypical "chola” is most commonly seen sporting a less-than-natural makeup application. This includes “sharpied” eyebrows, boundless eyeshadow, dark lip-liner and severely wing-tipped looks.

This popular 90s style once seriously flaunted is now an endless source of comedic material and parody. This is evident by the countless YouTube tutorials that have been created to teach users worldwide the techniques of Chola makeup.

With the help of Photoshop, Enriquez has Cholafied a variety of male and female celebs that result in hilarious but equally terrifying photographs.