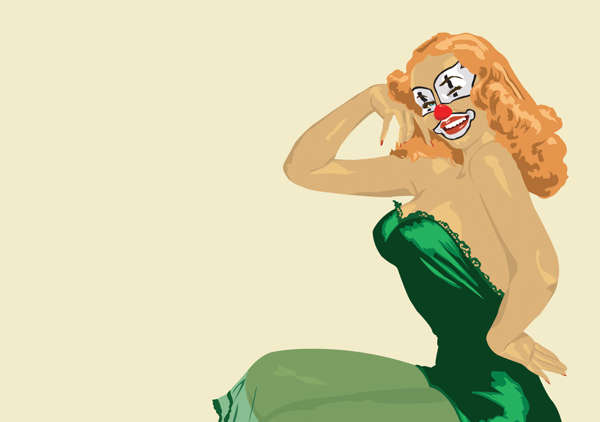 — June 25, 2013 — Art & Design
References: doctorojiplatico & designyoutrust
Share on Facebook Share on Twitter Share on LinkedIn Share on Pinterest
The 'Twisted Fifties' series by Ben O'Brien is a satirical take on cheeky pin up girls from the 'American Dream' era of the 1950s. Each illustration depicts a pin-up girl in a typical bombshell pose, but with a dark twist. For instance, one buxom beauty is shown in a form-fitting green dress, her blonde curls tossed over her shoulder; however, instead of a pretty face, this pin-up girl is shown with a face full of clown makeup. This is clearly a reference to the dolled-up beauties of the 1950s and retreat from natural beauty throughout that era.

Possibly the most striking of O'Brien's illustrations depicts a woman wearing a 50s-era power suit. Around her ankle is a ball and chain. Halfway through the chain rests an axe, cutting through the chain's links to free the woman, who stands triumphantly, looking off into the distance. The rise of feminism in the 1950s is clearly being highlighted in this illustration, showing that women were able to break free of their domestic chains throughout that decade and onward.

With his 'Twisted Fifties' series, O'Brien has managed to produce a collection that is both eye-catching and emotionally striking. These drawings are the perfect critique of beauty standards and female expectations, pointing out that, although society has advanced forward a bit since the 1950s, it is not quite perfect yet.
3
Score
Popularity
Activity
Freshness
Attend Future Festival