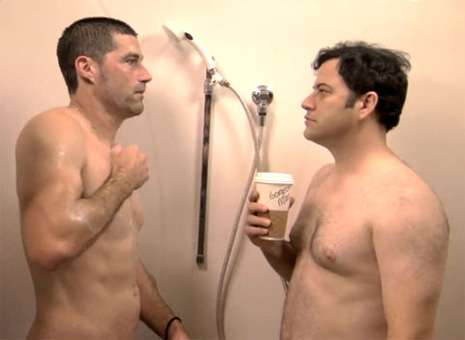 Jimmy Kimmel and Matthew Fox Bathe Together for 'Gorgeous Man'

lourdes sanchez bayas — May 15, 2009 — Pop Culture
References: ohlalamag
Last year, Jimmy Kimmel teamed with a group of A-list celebrities for the hilarious viral video “I’m F*cking Ben Affleck” which he made in response to his then girlfriend Sarah Silverman’s own satirical video jab at him.

Last night, the late night talk show host showed sidesplitting video banter on his show called Gorgeous Man that he made with hunky Lost star Matthew Fox. In the vid, the pair engage in a staring contest to decide, presumably, who is the most gorgeous of the two. They also sing a duet on a rooftop and somehow end up taking a shower together.

In my opinion, this video banter with Matthew Fox is not as hilarious as the other two from last year, but it undoubtedly has its sidesplitting moments.
3.9
Score
Popularity
Activity
Freshness