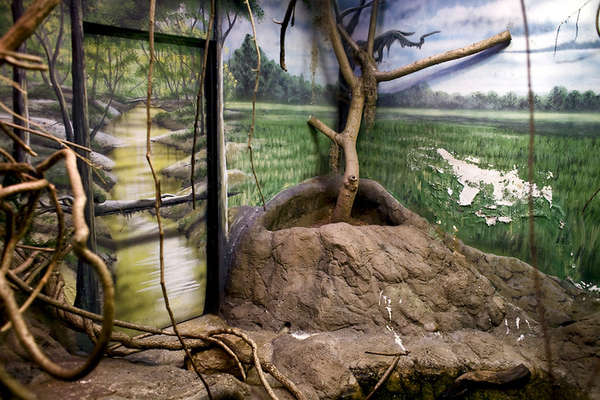 Meghan Young — October 30, 2012 — Fashion
References: danielkukla & fastcodesign
Share on Facebook Share on Twitter Share on LinkedIn Share on Pinterest
The Captive Landscapes photo series highlights the sad state of animal enclosures from zoos around the world. It is not cleanliness or disrepair that is being referred to in Captive Landscapes, but rather the depressing mockery of the animals' natural habitats. The walls may be beautifully painted with scenes of forests and beaches, fake rocks and trees rounding out the illusion, but it doesn't take a keen eye to see the line of a door, the deterioration of props and the domestication of the animals themselves.

Shot by New York City-based photographer Daniel Kukla, who has recently been recognized for his Edge Effect series, Captive Landscapes shows the disparity between man-made and natural havens. Kukla says, "I believe that zoos have the ability to function as incredible research and educational institutions, but more often than not, the animals are put on as a spectacle and the educational aspect seems to be lacking."
4.6
Score
Popularity
Activity
Freshness
View Innovation Webinars