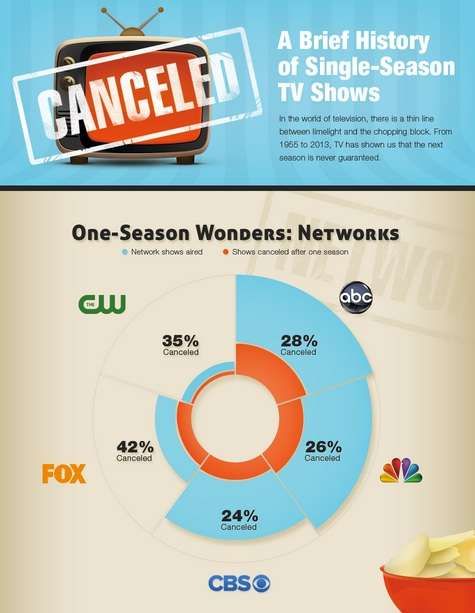 This Infographic Showcases TV Programs Canceled After Only One Season

Tana Makmanee — May 23, 2013 — Social Media
References: dailyinfographic
Share on Facebook Share on Twitter Share on LinkedIn Share on Pinterest
There's nothing worse than getting so invested in a television program only to see it canceled after one season, and this insightful infographic called 'Canceled: A Brief History of Single-Season TV Shows,' showcases the statistics surrounding canceled TV shows from 1955 to 2013.

I'm sure many of you still have fond memories of certain television programs that you absolutely loved but got cancelled way before its time, and this insightful chart outlines several well-recognized shows that surely people will remember. The infographic also outlines the percentage of canceled shows per network, how many episodes were aired in that single season, and what well-known stars may have appeared in them.

From the cancellation of such shows as Justice in 2006 and Terra Nova in 2011, this insightful chart breaks down the type of show that often gets canceled after only one season.
1.9
Score
Popularity
Activity
Freshness
Access Advisory Services