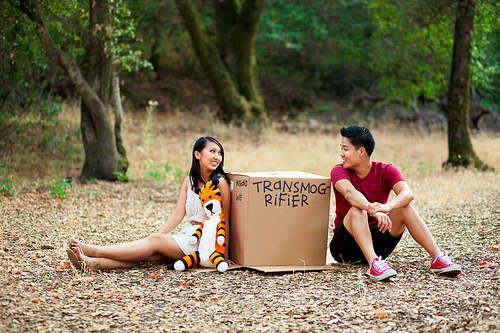 The Calvin and Hobbes Wedding is Whimsical and Nostalgic

Meghan Young — March 3, 2013 — Lifestyle
References: offbeatbride & neatorama
Share on Facebook Share on Twitter Share on LinkedIn Share on Pinterest
Weddings have traditionally revolved around standard themes such as fairy tale, black tie and even medieval, but since more obscure themes are becoming relevant thanks to the Internet, examples like the Calvin and Hobbes wedding are more prevalent. Forgoing the popularity of zombies and vampires for something a little sweeter and more nostalgic, this wedding must have been full of philosophical moments.

Created for newlyweds Stephanie and Jonathan, the Calvin and Hobbes wedding was inspired by a range of feelings including "joyful, kid-at-heart, quirky, whimsical, breezy, with a dash of mischievousness," as the couple reveals. Fans of the comic book series, it was only natural that they would put two-and-two together. The engagement shoot and wedding was shot by Junshien Lau and featured Calvin in the form of ring bearer and Hobbes as a teddybear.
3.4
Score
Popularity
Activity
Freshness
Get Trend Hunter Dashboard