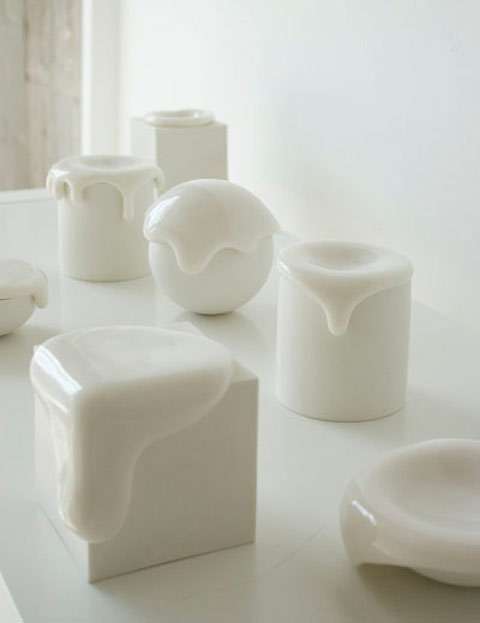 The 'boxes' by Koji Shiraya are Oozing

Erin Kirkpatrick — June 15, 2012 — Art & Design
References: kojishiraya & lostateminor
Share on Facebook Share on Twitter Share on LinkedIn Share on Pinterest
With crisp color and delicate construction, 'boxes' by Koji Shiraya oozes with style, quite literally. These boxes are constructed so that they appear to be in the midst of melting and spilling over with an unknown substance. The body of the box is made from porcelain, while the lid is made from a slightly different material called feldspar -- often described as a glaze material. This container appears to be alive with a brimming batch of white gelatinous liquid that drips down all of its sides.

The "oozing" part of the porcelain container, which is in fact the lid, can be removed to reveal a spacious storage container for all your odds and ends. In order to create an organic, yet functional lid shape, the lid of this malleable storage unit was melted alongside the body.