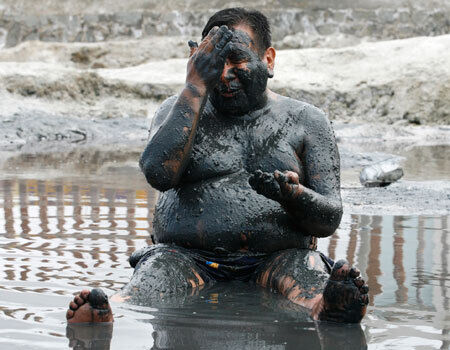 IdeaMan — October 4, 2008 — Lifestyle
References: foxnews & foxnews
Share on Facebook Share on Twitter Share on LinkedIn Share on Pinterest
I know some practices in other cultures may seem odd or even downright dangerous to those of us who grew up with so-called 'modern' medicine, and I know some of those 'folk remedies' actually work better than high-tech drugs. But some things just don't seem to have a reason that they should work.

A Fox News photo essay explores several of these alternative treatments. Some seem to at least have some logic behind them, but some of them definitely fall into that latter nonsensical category. Take, for example, mud baths. Their claim to absorb oils and dead skin is plausible and may work to some extent. But others, like eating live fish (with, apparently, mustard), applying suction cups all over your body, or munching on live tree frogs just don't seem to have much promise to me.

People in other countries aren't the only ones to try out these strange methods. Celebrities like Demi Moore, Gwyneth Paltrow, and, yes, even Britney Spears have also reportedly tried them.
1.9
Score
Popularity
Activity
Freshness
Attend Future Festival Virtual