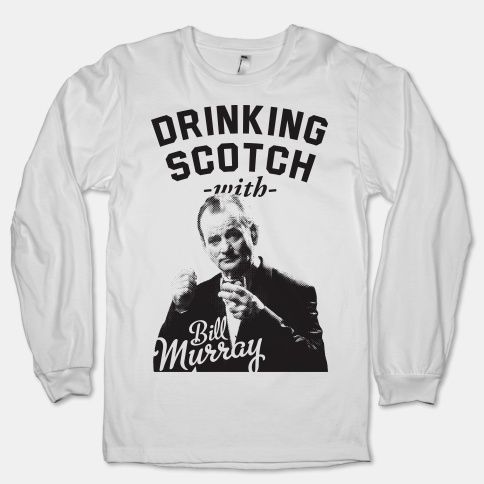 Vasiliki Marapas — December 17, 2013 — Special
References: fancy
Share on Facebook Share on Twitter Share on LinkedIn Share on Pinterest
This Bill Murray Shirt will appeal to scotch-lovers and fans alike. The shirt, which features a photograph of the funny man, reads: "Drinking Scotch with Bill Murray." As a Saturday Night alum and Wes Anderson favorite, Bill Murray seems like an all-around cool dude who you'd want to share a drink with. Moreover, Bill is known as incredibly down-to-earth and detached from the Hollywood scene, meaning there wouldn't be any excessive name-dropping or condescension.

Unfortunately, it seems pretty unlikely that you'll ever be cheers-ing Bill with a tumbler of scotch. However, this fun shirt makes your aspiration to share a drink with Bill Murray apparent. If you ever do get the opportunity, make sure to get some photographic evidence.
2.1
Score
Popularity
Activity
Freshness
Jeremy Gutsche Keynote Speaker