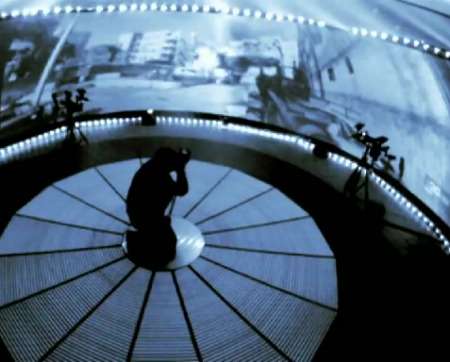 The Battlefield Simulator Convinces All 5 Senses that You're in Combat

Omar Yusuf — October 21, 2011 — Tech
References: kotaku & geekologie
Share on Facebook Share on Twitter Share on LinkedIn Share on Pinterest
Having seen the Battlefield Simulator in action, it's difficult to return to an Xbox or even a capable PC setup. Typically, players interact with the game visually and through tactile, controller movements -- the only human element involved is hand-eye coordination. Contrariwise, the Battlefield Simulator challenges every iota in your body as though you were legitimately in a skirmish with foreign combatants.

The gaming environment begins with a copy of Battlefield 3, the anticipated infantry game slated for a late-October release, and a full 64-player server. Once online, a wireless peripheral is used in lieu of an actual gun, a multi-directional treadmill records your movements and a panoramic, wrap-around screen provides complete immersion. Here's the kicker: paintball turrets are installed on the walls and fire painful projectiles at the player whenever his in-game character is shot, meaning gamers will have to physically pay for their mistakes. Though I'm not necessarily squeamish, the thought of being shot by paintballs for my in-game actions is beyond worrying.
2.7
Score
Popularity
Activity
Freshness
Attend Future Festival