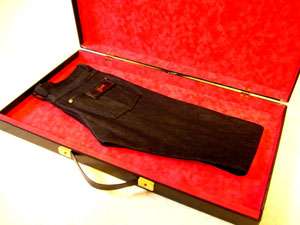 Made Wise — January 2, 2007 — Fashion
References: april77.fr & madewise
April 77, out of Paris, launched a limited jean which comes in a vintage Gibson Guitar case. Production was limited to 500 pieces. April 77 seem to be leaving their mark on the current denim trade. With the current Rock/Punk influence and the skinny/raw denim as common as it is, April 77 are sure to continue expanding.

Implications - For anyone wishing to get their legs in a pair of these limited-edition jeans, you'll have to make your way to one of the three locations that they'll be available at. If you're in London, Paris or Tokyo, you're in a much better position to grab some as those are the cities which they are being sold in.
3.8
Score
Popularity
Activity
Freshness