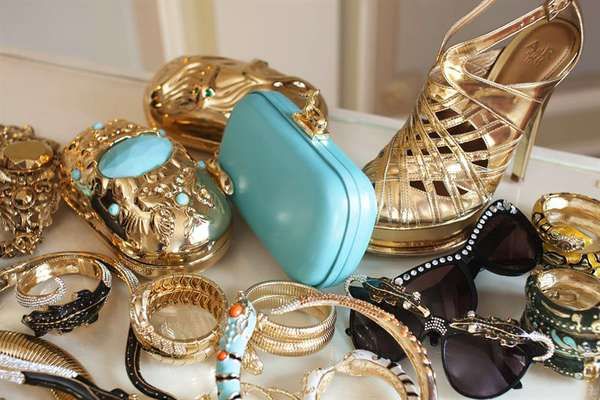 Anna Dello Russo for H&M is Eccentric and Eclectic

Shiori Mine — May 5, 2012 — Fashion
References: hm & fashiontrendsdaily
Share on Facebook Share on Twitter Share on LinkedIn Share on Pinterest
H&M has released a slew of designer collaborations over the years, but Anna Dello Russo for H&M is its latest collection set to release in fall 2012. The Vogue Japan editor-at-large is known for her eclectic and over-the-top accessories, so it is only fitting she is creating a series of bejeweled beauties. In addition to jewelry, ADR is designing handbags, shoes and sunglasses for her collaboration.

Russo has taken much of her inspiration from the furnishings and fabrics used to decorate her Milan apartment. The preview appears to feature lots of gold, art deco details, exotic animal textures and punches of turquoise blue. While H&M has collaborated with numerous high-end designers, Anna Dello Russo is one of the few non-designer icons to join forces with the Swedish retailer. Anna Dello Russo for H&M showcases ADR's eccentric tastes, but has been tailored to be affordable and accessible for H&M's budget-conscious market.