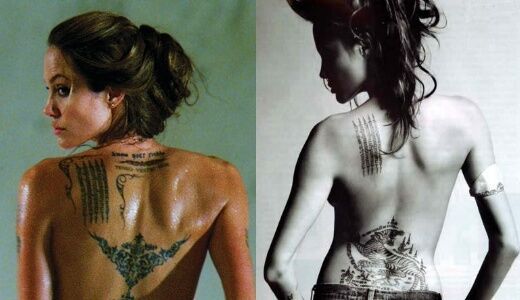 Angelina Jolie is well known for her love of tattoos. Over the years she has acquired a solid collection of 13 unique tattoos. And with a habit of tattooing the geographical coordinates of the birthplaces of her children, she might soon be adding another tattoo or two.

When it comes to movies, Jolie often has to cover her tattoos up with layers of make-up during nude or love scenes. However, in her new 2008 action movie, â€œWanted,â€ Jolie was able to not only show all she's got, but to indulge in adding more tattoos especially for the movie.

In the movie, Jolie plays the 'foxy' assassin Fox, a member of The Fraternity, a super secret society. The bad-ass character was a perfect fit for Jolie's tattoos.

Jolie's real tattoos include a Tennessee Williams quote, â€œA prayer for the wild at heart, kept in cagesâ€, a Yantra prayer written in the ancient Khmer and Pali scripts for her son Maddox, the Latin proverb â€œquod me nutrit me destruitâ€ (what nourishes me destroys me), and the Arabic phrase (strength of will).

The tattoos she added for the movie include a 'toil' on the underside of one arm and 'tears' on the other one, among others.