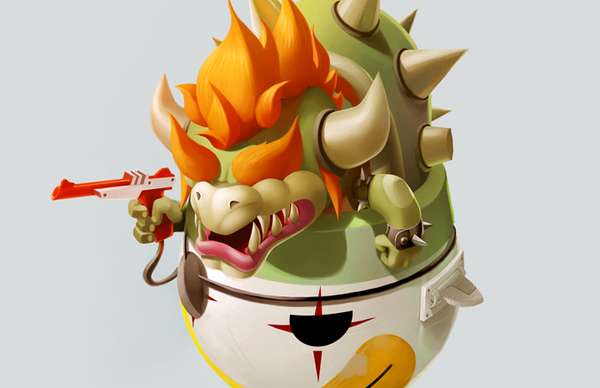 Jason Soy — April 18, 2012 — Tech
References: fourthwish & rampagedreality
Share on Facebook Share on Twitter Share on LinkedIn Share on Pinterest
There’s definitely something about these Andrew Wilson illustrations that tickle viewers’ eyes in a peculiar and pleasurable manner. Audiences may be quick to credit Wilson’s vibrant depictions of classic Nintendo characters as the trigger for the euphoric feelings they are experiencing, but that’s inaccurate as other artists’ renderings don’t quite have the same effect. Personally, I believe it’s his distinct and rigid use of the ¾ perspective.

Andrew Wilson’s paintings of Super Mario Bros., Metroid and Legend of Zelda characters all adhere to the same set of conditions: each game avatar is presented in a ¾ shot with a light source coming from the upper right corner. As such, when sifting through these images, viewers almost feel as though the subjects are interacting in the same environment, much like a video game. This creates a pseudo-3D effect that’s inventive and distinct to these particular Wilson illustrations.