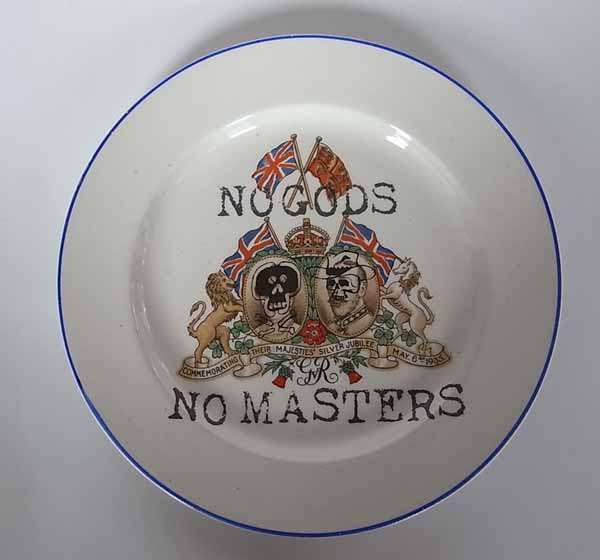 "Is she a visionary muralist? A craftivist? An anarchic artist?" an article called The Art of Craftivism in The Observer asked. "Reichardt is not one for labels, though she does like the idea of being a craftivist – 'marrying craft with activism' – and being part of a movement that is anti-sweatshop, against mass production and very much focused on sustainability and giving new life to old materials. Perfect for recessionary times."

Carrie collects old and vintage plates and gives them a new twist by re-firing them with layers of ceramic transfers.

One look at her Etsy shop shows just how anarchic her work is. I wonder how long it can stay there until it gets banned?

She is about to be in a group show called ‘Renegade Potters and Extreme Craft' at Ink_d Gallery, Brighton from March 12th. Should be a very interesting show, with work also from War Boutique, Jimmy South, Matt Smith and Paul Scott.

Surely this inventive and funny way of reusing old plates deserves to be a new trent this decade. Out with the new, and in with the old.
1.7
Score
Popularity
Activity
Freshness
Jeremy Gutsche Keynote Speaker