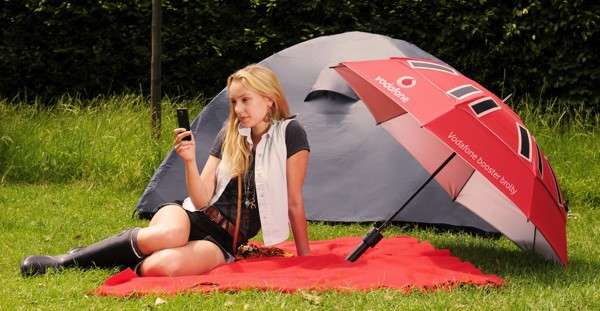 The Booster Brolly Will Juice Your Phone, Rain or Shine

Frank Luanda — June 15, 2012 — Eco
References: engadget
Share on Facebook Share on Twitter Share on LinkedIn Share on Pinterest
It’s usually a bad thing being stuck in the rain with a dying cellphone, but European networking giant Vodafone is offering a solution to portable phone charging with the Booster Brolly. Developed at the University College in London, the Booster Brolly is an umbrella that triples up as a charger and signal booster.

The brolly harnesses the power of the sun via solar panels within the canopy. The electrical components are housed in carbon-fibre, with a USB port located on the handle. The brolly is capable of fully charging most phones in less than 3 hours. Anyone using a cellphone underneath its canopy receives a 3G signal boost.

While the Booster Brolly is currently a concept slated for release in the UK, it could definitely be of use in North America, especially with all the outdoor concerts abuzz during the spring and summertime.

Implications - Charge your phone outside, no matter the weather, and look good while doing it.
2.7
Score
Popularity
Activity
Freshness
View Innovation Webinars