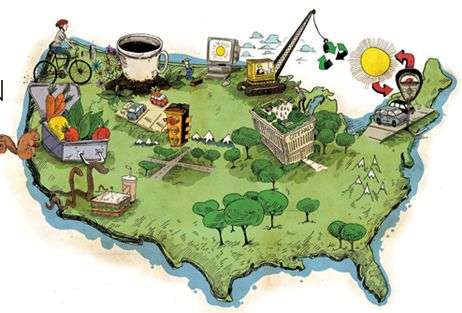 New York City has passed a law to convert its entire fleet of taxis to hybrids replacing the old gas-guzzling Crown Victoria cabs, which get around 10 miles a gallon. Ann Arbor, Michigan is replacing 1,400 street lights with LEDs which it estimates will save $100,000 a year and pay for themselves in four years.

But, according to the NY times, "The greenest thing you can do is this: Choose the right leaders. It is so much more important to change your leaders than change your light bulbs."

"Why? Because leaders write the rules, set the standards and offer the tax incentives that drive market behavior across a whole city, state or country. Whatever any of us does individually matters a tiny bit. But when leaders change the rules, you get scale change across the whole marketplace. And the energy-climate challenge we face today is a huge scale problem. Without scale, all you have is a green hobby."

According to the National Geographic the top 10 Green cities in the US in 2006 were: