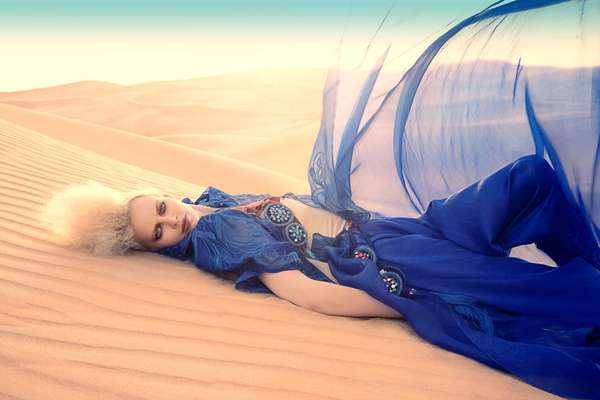 Meghan Young — June 21, 2011 — Fashion
References: amatohautecouture & fashionising
Share on Facebook Share on Twitter Share on LinkedIn Share on Pinterest
Even without the breathtaking desert backdrop that is used in the Amato Haute Couture 2011 lookbook, this photoshoot would have been epically exotic. That, of course, is due to the stunning styles showcased throughout the photoshoot. From electric blue hues to dramatically flowing fabrics, these fashions seem made for a sultan's daughter.

Shot by fashion photographer Tina Patni, the Amato Haute Couture 2011 collection was designed by Furne One. As though inspired by the sweeping sands of this desert landscape, the colors, materials and tailoring seen throughout fit perfectly in it. Perhaps he was inspired by the film 'Lawrence of Arabia,' as Fashionising points out.

I especially like the setting sunlight caught in the Amato Haute Couture 2011 lookbook. It adds a soft romance to it all.
5
Score
Popularity
Activity
Freshness
Get the 2021 Trend Report FREE