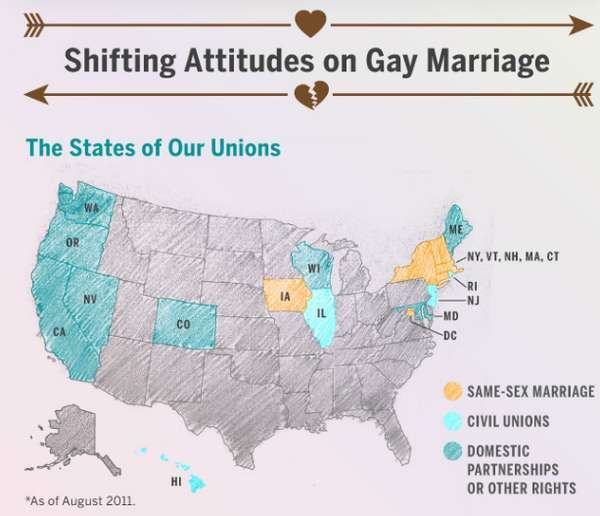 Marie C. Hudson — September 10, 2011 — Lifestyle
References: good.is & dailyinfographic
Share on Facebook Share on Twitter Share on LinkedIn Share on Pinterest
The legalization of gay marriage in New York on June 24, 2011, marked a huge step forward for same-sex couples everywhere, showing that American opinions on LGBTQ rights are changing -- which is exactly what the 'All's Fair in Love' infographic displays.

In 10 years, from 2011 to 2011, opposition to gay marriage in the United States moved from 57 percent to 46 percent -- less than half of the population. While this does still seem like a large amount, the shift is enough to have allowed 19 states to pass bills that grant the marriage, civil unions, or domestic partnerships and other rights to gay couples that are available to heterosexuals in other states.

While it's impossible to fully prove, I wouldn't doubt that artists like Lady Gaga have helped influence these changing opinions. Her involvement in the gay rights movement and her continual financial assistance given to homeless gay youth have definitely helped raise awareness and acceptance not only in America, but the world.

'All's Fair in Love' is hopeful and heartwarming, showing the progress that has been made and that which will come in the future.
2.5
Score
Popularity
Activity
Freshness
Attend Future Festival